Reports reaching the desk of My New Ghana indicate that popular Kumawood Andrew Ntul Mensah, popularly known as Scorpion Gh has been gunned down by armed robbers.

Reports say that he was shot in Aburaso New Site near Kumasi in the Ashanti region at about 2:40 a.m on Thursday after an attack.

Police personnel at the Suntreso District Police Command rushed to his house after hearing the news and saw Scorpion Gh lying restlessly in a pool of blood.

Police investigations revealed that the robbers used a car jerk to open up portions of a burglar-proof and gained access to the main building and went to the victim’s door.

His brother, Emmanuel Ntul, confirmed the incident to the media, saying that his brother was shot in the right thigh and left ribs.

“He was with his wife and children when the incident happened. They forced the door open during a struggle and according to him, one of them was ordered to shoot at my brother,” he said. 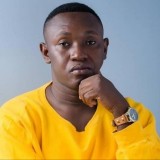 Ghanatunez.com is a entertainment website established to promote music strictly made in Africa and also to promote new upcoming talent for the world to see.
Speak Of Talent And You Will Hear Our Name.